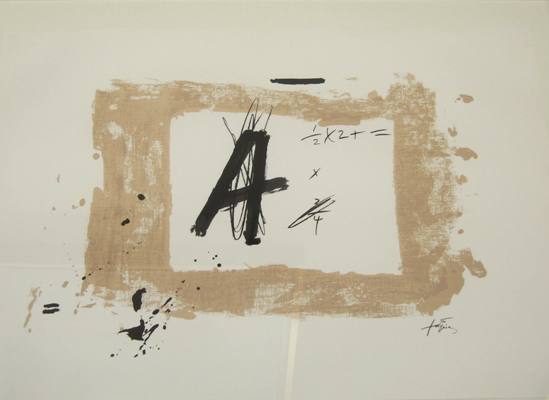 Antoni Tàpies (b. 1923, Barcelona, Spain; d. 2012, Barcelona, Spain) is a Catalan painter, sculptor, printmaker and writer widely acclaimed for his 'matter paintings'. As a pioneer of Art Informel, Tàpies uses sand, dust, wood as well as paint and varnish to create alchemical paintings which connect base materials with an unseen, metaphysical world. Since the 1950s, his pallet has been constrained to raw natural colours: burnt black, earth brown, wine red, rust red, the gold of sand or marble. Born into a family of publishers, Tàpies was an intellectual who loved books and was greatly influenced by the thirteenth-century Catalan mystic Ramon Llull, who constructed his own alphabet in which individual letters had their own meanings. A private syntax of ciphers also abounds in Tàpies' work, often appearing as an amalgam of Eastern calligraphy and Western graffiti. His ubiquitous 'cross' simultaneously signifies the first letter of his surname, a kiss, an erasure, a location, a vote, or a mark of faith. These marks often appear as an amalgam of Eastern calligraphy and Western graffiti, while also marking the influence of Paul Klee and Juan Miró.

Shortly after abandoning his legal studies, in 1948 Tàpies co-founded Dua al Set, the first post-war art movement in Spain. In 1950, he had his first solo exhibition at the Galeries Laietanes, Barcelona. In 1952, Tàpies gained early recognition with his participation in the Venice Biennale and at the Carnegie Institute, Pittsburgh in 1952. A year later he had his first solo exhibition in New York at the Martha Jackson Gallery. His first retrospectives were in 1962 at the Kestner-Gesellschaft, Hannover and the Solomon R. Guggenheim Museum, New York. His first major exhibition in Great Britain was at the Institute of Contemporary Arts, London (1965). In 1993 UNESCO awarded him the Picasso medal and major retrospectives were staged at the Solomon R Guggenheim Museum (1995) and at the Museo Nacional Centro de Arte Reina Sofía (2000, 2004). The artist has received many awards including the Peace Prize from the United Nations Association in Spain (1984), the Commander of the Order of Arts and Letters from the French Government (1988), and the Golden Lion at the Venice Biennale (1993) and was made honorary member of the Royal Academy of Arts, London (1998). In 2005 he was awarded the Lissone prize for his life's work.